Halloween/Samheim is a very important day for satanic and pagan rituals with regards to sacrifice and rituals.

Philadelphia is no stranger to the celebration and festivals surrounding Halloween/Samheim. Recently one of the largest independent schools in the Philadelphia area (Temple University) released its grand designs on October 31, 2014.

Philadelphia is home to one of the original main Grand Lodge or Masonic Temple on Broad Street, one of the main roadways that was landscape to form a cross road with Market Street in downtown Philadelphia. (Photo of Temple University master plan below) 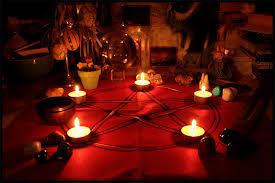 The Philadelphia Art Museum used for the famous Rocky movies is also a scene straight from a horror movie because Eakins Ovals which sits at the footsteps of plateau where Rocky did his dance is the forerunner of Moloch.

More recently, Halloween/Samheim will require its human sacrifice for the public. The benefit is that we can feel safe and secure for another year. Like most rituals someone is demonize or is the  demon and the public will have its ritual.  In the Poconos Mountains, Delaware Native American  word meaning “streams between mountains” a 2-hour drive from Philadelphia, Eric Frein was captured in an abandoned  plane hanger. He was arrested on Halloween Eve night and prosecutors are seeking the death penalty.

The public was on lock down and his captured made world-wide news but know that the area is “safe”, children will have their Halloween parties and celebrations because the sacrifice has been made and the bogey man is behind bars.

Mel Brake is an awarding winning Philadelphia based poet/singer/song writer, whose poetry has appeared in several media outlets and journals, including Philadelphia Poets 2007, 2008 and 2009, Mad Poets Review, Fox Chase Review, and The Philadelphia Bulletin. In addition, Long Island Sounds: An Anthology of Poetry, Writing Outside The Lines (WOSTL) Anthology, Word Riot Magazine, The New Verse News, Word Salad Magazine and Poetry Ink 2010 has published his works. Recently, his band, the Mel Brake Family Band performed a benefit concert at Cross Road Café in Delaware County. He is the Founder and Executive Director of MPW, a non-profit organization, focusing on using the arts to reach children in the Tri-state area. In addition, his first chapbook, “Obama Poetry Project” is available at: MelBrakEpress.blogspot.com.
View all posts by melbrake →
This entry was posted in Uncategorized and tagged Eric Frein, Halloween, Human Sacrifice, Mel Brake 2014, Melbrake.wordpress.com, Moloch, Pagan Ritual, Philadelphia Art Museum, Samheim, Satanic Ritual, Temple University. Bookmark the permalink.