Disease Worse Than Ebola Spreading in US

“ANOTHER DISEASE IS SPREADING AFFECTING THE RESPIRATORY SYSTEM; IT IS HIGHLY CONTAGIOUS.”

The Measles had been declared eliminated in the United States in 2000 but its back with a vengeance. This origin of this outbreak is reported to have sprung in Walt Disney Land December 15-20, 2014.

Measles is a highly contagious respiratory disease caused by a virus. It spreads through the air through coughing and sneezing. Measles starts with a fever, runny nose, cough, red eyes, and sore throat, and is followed by a rash that spreads all over the body. About three out of 10 people who get measles will develop one or more complications including pneumonia, ear infections, or diarrhea. Complications are more common in adults and young children. 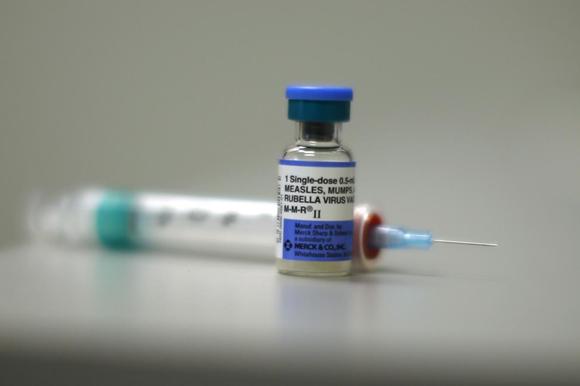 (Reuters) – Tens of thousands of commuters on San Francisco’s Bay Area Rapid Transit system may have been exposed to measles after an infectious Bay Area resident rode a train to and from work for three days last week, public health officials said on Wednesday.

The rider represents the first case of measles confirmed by Contra Costa County health officials during an outbreak of the disease that began in late December. The infected person also spent time at a San Francisco restaurant and bar on the evening of Feb. 4.

“Although the risk of contracting measles by being exposed on BART is low, Bay Area residents should be aware of the situation,” the county public health department said in a statement.

The California Department of Public Health said on Wednesday that 110 cases of measles had been confirmed in California, many of them linked to the outbreak that authorities believe began when an infected person from out of the country visited Disneyland in late December.

More than three dozen more cases have been documented in other U.S. states and in Mexico. Most people recover from measles within a few weeks, although it can be fatal in some cases.

In the Bay Area case, the infected person was known to have traveled between the Lafayette station in the East Bay and the Montgomery station in San Francisco during the morning and evening rush-hour commutes on Wednesday, Thursday and Friday of last week, BART spokeswoman Alicia Trost said.

That ride is 35 minutes long, but health officials said the highly infectious, airborne virus could have remained in the air for up to two hours. Because BART cars circulate throughout the Bay area, tens of thousands of people could have potentially been exposed, Trost said.

The infected rider, who was not identified by name, age or gender, also spent time at the E&O Kitchen and Bar in San Francisco on Wednesday evening, potentially exposing others who were in the restaurant between 5:30 p.m. and 7 p.m., health officials said.

Public health officials said they were tracing the movements of the person, who is recovering and not hospitalized, and notifying others known to have had close contact.

Authorities sought to downplay the risk to commuters or diners, however, saying that most people had been inoculated for the disease, but urged anyone who had not to get vaccinated.

“We do know that measles has been circulating through the Bay Area. This person doesn’t know where they were exposed,” said Erika Jenssen, Contra Costa County’s communicable disease programs chief.

Among the more than three dozen cases reported outside of California are 10 in Cook County, Illinois, nine of them associated with a daycare center in the city of Palatine.

The measles outbreak has renewed a debate over the so-called anti-vaccination movement, in which fears about potential side effects of vaccines, fueled by now-debunked research suggesting a link to autism, have prompted a small minority of parents to refuse inoculations for their children.

Some parents also opt not to have their children vaccinated for religious or other reasons.

Measles was declared eliminated in the United States in 2000 after decades of intensive childhood vaccine efforts. But in 2014 the country had its highest number of measles cases in 20 years.

Mel Brake is an awarding winning Philadelphia based poet/singer/song writer, whose poetry has appeared in several media outlets and journals, including Philadelphia Poets 2007, 2008 and 2009, Mad Poets Review, Fox Chase Review, and The Philadelphia Bulletin. In addition, Long Island Sounds: An Anthology of Poetry, Writing Outside The Lines (WOSTL) Anthology, Word Riot Magazine, The New Verse News, Word Salad Magazine and Poetry Ink 2010 has published his works. Recently, his band, the Mel Brake Family Band performed a benefit concert at Cross Road Café in Delaware County. He is the Founder and Executive Director of MPW, a non-profit organization, focusing on using the arts to reach children in the Tri-state area. In addition, his first chapbook, “Obama Poetry Project” is available at: MelBrakEpress.blogspot.com.
View all posts by melbrake →
This entry was posted in California Measles, Measles Out Break US, Measles Worse Than Ebola, Mel Brake 2015, Melbrake.wordpress.com, Psychic Mel Brake, revelacionesmarianas.com, San Francisco Measles, Walt Disney Land Measles. Bookmark the permalink.