A big ass asteroid made a close pass by the Earth by at least 4 million miles. The asteroid is named after Florence Nightingale. Since records (NASA) have been kept and tracking of near by objects to Earth, Asteroid Florence 3122 was the largest asteroid to come this close to our planet.

This is really the biggest news astronomically since the total solar eclipse in America only a few weeks ago. Like the eclipse the asteroid is the biggest one to get this close to the Earth in one hundred years. But are we really safe.

The Electric Universe Theory is based on the supposition that the universe is electric and plasma which react strongly to electro-magnetic fields.

Outside just after the time that the asteroid was to pass by the Earth and took these pictures.  The Sun had a rainbow halo around it at the time. 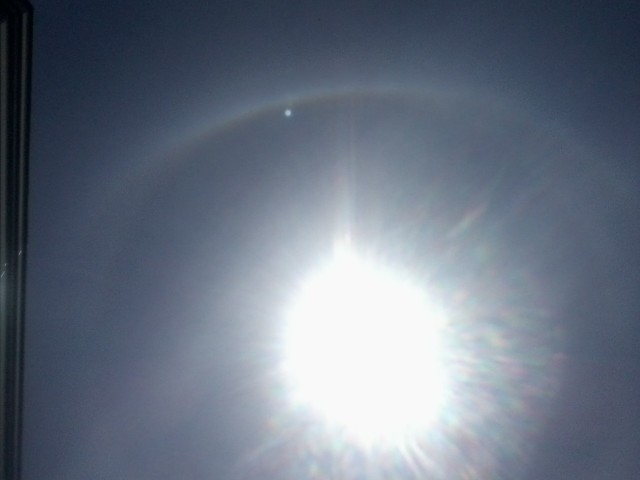 Asteroid Florence 3122 can have an effect on the Earth because of the electro magnetic fields of the asteroid and the Earth interacting.

During the next week days in the North Hemisphere, Asteroid Florence 3122 will move through Aquarius Constellation. Look to the South late tonight and thereafter to see another amazing astrological one-hundred year event.

Mel Brake is an awarding winning Philadelphia based poet/singer/song writer, whose poetry has appeared in several media outlets and journals, including Philadelphia Poets 2007, 2008 and 2009, Mad Poets Review, Fox Chase Review, and The Philadelphia Bulletin. In addition, Long Island Sounds: An Anthology of Poetry, Writing Outside The Lines (WOSTL) Anthology, Word Riot Magazine, The New Verse News, Word Salad Magazine and Poetry Ink 2010 has published his works. Recently, his band, the Mel Brake Family Band performed a benefit concert at Cross Road Café in Delaware County. He is the Founder and Executive Director of MPW, a non-profit organization, focusing on using the arts to reach children in the Tri-state area. In addition, his first chapbook, “Obama Poetry Project” is available at: MelBrakEpress.blogspot.com.
View all posts by melbrake →
This entry was posted in Uncategorized and tagged #AsteroidFlorence, #Florence3122, #MelBrake2017, #SeptemberAsteroid, #SeptemberAstrology, Asteroid, Melbrake.wordpress.com. Bookmark the permalink.