While at work I experienced another visitation by Mother Mary, I will not go into details about how this happened but I will say that I was shocked that Mother Mary manifestation was when it was because I was focused on working. Nonetheless, I am forever grateful for her Presence.

I do feel at this time that its important that I reveal more about Mother Mary’s visitation to me on September 25-26, 2017, and in her visitation when she was laying in bed and dying there was a flat screen TV on the wall and Mother Mary spoke in Spanish and said the word “ESPANA” was prominent in many of messages that she spoke to me.

Mother Mary was making an important announcement on TV.

Mother Mary was broadcasting a message for all to receive or a NOTICE for all to see just like a TV broadcast would do.

My understanding of both apparitions this week from Mother Mary is that she is speaking about a NOTICE that she gave to another set of children in 1961 in Spain at Garabandal. That the NOTICE is about the now times and a warning that Mother Mary spoke of 56 years ago. 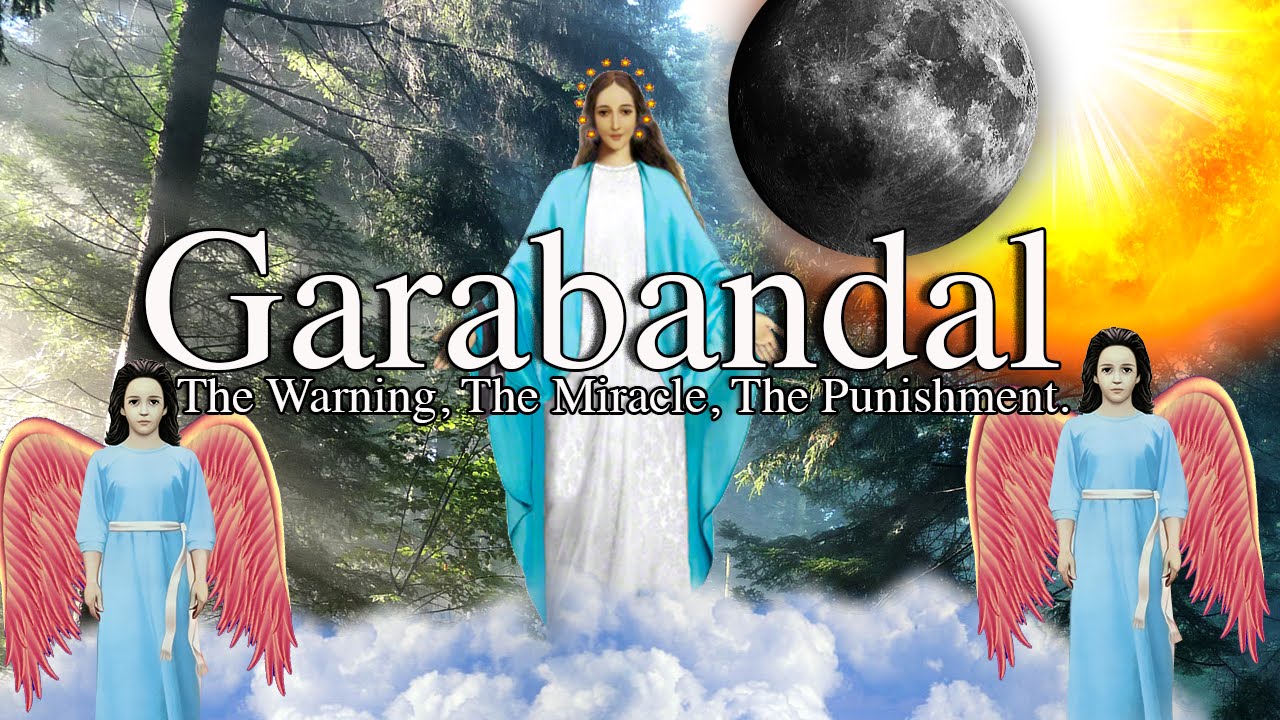 Just what was the NOTICE:

The MIRACLE of Garabandal comes shortly after the NOTICE to confirm to the world that the NOTICE came from God and there is no doubt of its nature.

Below we present some comments made by the main visionary, Conchita González who at that time was 16 years old:

* That this Notice is linked to a phenomenon of nature; that this name exists in the dictionary and starts with the letter “A”.

* That the Warning is something that comes directly from God and can be seen all over the world at the same time.

* That it will be a relationship of our sins and will be seen and experienced by both believers and non-believers and people of all religions.

* That the Warning is like a purification to prepare for the Miracle.

* That it is also a kind of catastrophe, which will make us think of the dead, that is, we would rather be dead than experience the experience of the Warning.

* That this Notice will be a correction of the conscience of the world, and those who do not know Christ, that is, non-Christians will believe that it is a Warning from God.

* That the most important thing of that day is that all the people of the world will see a sign, a grace or a punishment within themselves, in other words, a Warning.

* That they will be completely alone in the world at that moment, no matter where they are, alone with their conscience and before God. You will then see all your sins and what your sins have provoked.

* That each person will feel this event differently because it will depend on the conscience of each one, since the sins are different those of a person and those of another.

* The Notice will be linked to an astral phenomenon, as if two stars collide with each other; that this phenomenon will not produce physical damage, but it will frighten us, because at that very moment we will see our souls and the damage we have done; it will be as if we are dying, but we will not die by its effects, although we may die of fear or the impression of seeing ourselves.

These revelations given in that small village are condemned with so many given over time throughout the world being able to verify that said NOTICE will come as a final bell for humanity, which will be plunged into a deep planetary crisis.

THE NOTICE , MINE PEOPLE, SHOULD FIND THEMSELVES OF THE BAD COMMITMENT AND I LOOK AT SO MANY THAT EXPECT THE NOTICE OR THE SIGNS BEFORE THIS TO BECOME …

THE INSTANT IS THIS, THE CONVERSION MUST BE NOW! REPENTANCE SHOULD NOT WAIT.

DURING THE NOTICE, EACH HUMAN CREATURE WILL FACE YOUR SINS, WILL LOOK AT ALL YOUR LIFE, WITH YOURSELVES AND DISCOVERS, BEING UNABLE TO ESCAPE TO THIS ACT OF OUR WILL. THE NOTICE WILL LAST INSTANT AND FOR EACH ONE OF YOU WILL APPEAR AN ENDLESS TIME FOR THE GREAT SUFFERINGS THAT WILL LIVE. THE NOTICE IS NOT TO ALERT THEM, BUT THAT THEY LOOK TO HIMSELF AND THE SOUL AND THE SPIRIT EMBRACE THE RETURN TO LIFE IN OUR WILL. EVEN PASSED THE NOTICE, I WILL FIND HUMAN CREATURES WHICH WILL REBEL WITH GREATER STRENGTH AGAINST ME, BLAMING THAT PAIN FOR WHOM THEY HAD.

THE WARNING IS MERCY OF MY HOUSE, BUT PAST THIS, FREE WILL DECIDE IF CONTINUED IN DISAPPOINTING DIVINE LOVE OR ADHERE TO OUR WILL.

Mel Brake is an awarding winning Philadelphia based poet/singer/song writer, whose poetry has appeared in several media outlets and journals, including Philadelphia Poets 2007, 2008 and 2009, Mad Poets Review, Fox Chase Review, and The Philadelphia Bulletin. In addition, Long Island Sounds: An Anthology of Poetry, Writing Outside The Lines (WOSTL) Anthology, Word Riot Magazine, The New Verse News, Word Salad Magazine and Poetry Ink 2010 has published his works. Recently, his band, the Mel Brake Family Band performed a benefit concert at Cross Road Café in Delaware County. He is the Founder and Executive Director of MPW, a non-profit organization, focusing on using the arts to reach children in the Tri-state area. In addition, his first chapbook, “Obama Poetry Project” is available at: MelBrakEpress.blogspot.com.
View all posts by melbrake →
This entry was posted in Uncategorized and tagged #Garabandal, #MelBrake2017, #Melbrakewordpresscom, #MotherMary, #October13, #October2017, #OurLadyofFatima, #TheNOTICE, #TheVirginMother, #TheWarning, #WomanClothedInTheSun, comet. Bookmark the permalink.