An Amtrak train crashed carrying high ranking members of Republicans. Could this have been an attempt on the President’s life. Trump and Pence were generally known to make an appearance.

The last Blue Moon and Total Lunar Eclipse was witnessed on March 31, 1866 and that is about 150 years ago.

Pluto rules over death, destruction and re-birth, life and transformation 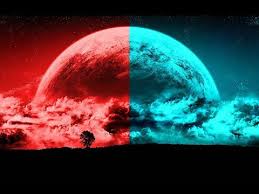 The Blue Moon is a rare astrological event itself and occurs (rarely) when there is two Full Moons in one moon cycle every 29 days on average: January 01, 2018 and January 31, 2018.

So what does this mean, lets considered what also happened in 1866 during a Blue Moon and Total Lunar Eclipse and a Saturn and Pluto cycle.

The American Civil War came to an end in 1866 and Black Americans were freed and the 13th Amendment was passing ending enslavement of Black Americans.

The Reconstruction Era began in America where Black Americans took political offices and gained human rights for freedom and rebuilding the Southern half of American.

The actions during the last Blue Moon and Total Lunar Eclipse in 1866 were a strong indication of the Saturn and Pluto cycle of rebuilding and tearing down laws and orders of regimes that do not work for the common good of all people.

Mel Brake is an awarding winning Philadelphia based poet/singer/song writer, whose poetry has appeared in several media outlets and journals, including Philadelphia Poets 2007, 2008 and 2009, Mad Poets Review, Fox Chase Review, and The Philadelphia Bulletin. In addition, Long Island Sounds: An Anthology of Poetry, Writing Outside The Lines (WOSTL) Anthology, Word Riot Magazine, The New Verse News, Word Salad Magazine and Poetry Ink 2010 has published his works. Recently, his band, the Mel Brake Family Band performed a benefit concert at Cross Road Café in Delaware County. He is the Founder and Executive Director of MPW, a non-profit organization, focusing on using the arts to reach children in the Tri-state area. In addition, his first chapbook, “Obama Poetry Project” is available at: MelBrakEpress.blogspot.com.
View all posts by melbrake →
This entry was posted in Uncategorized and tagged #13thAmendment, #1866, #AmericanCivilWar, #BlackAmericans, #BlueMoon, #FirstBlueMoonJanuary2018, #Freedom, #HumanRights, #January2018Astrology, #LincolnAssassinated, #Melbrake2018, #PresidentLincoln, #ReconstructionEra, #SaturnPlutoCycle, #TotalLunarEclipse, Pluto, Saturn. Bookmark the permalink.