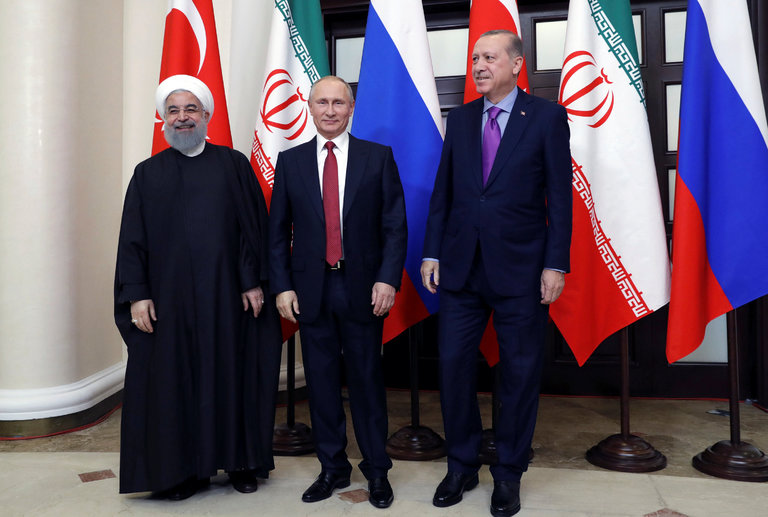 Nostradamus Quatrain V-2
Seven conspirators at the banquet cause to flash,
Against the three the iron, out of the ship:
The one will have two fleets driven to the great [one],
When by the mail. [The] Denier to the façade draws him [in].

Could the three the iron be Russia, Turkey and Iran that formed an alliance to determined the fate of Syria after seven years of a bloody civil war. The US and the West are absence from today’s meeting. Could the formation of the three tyrants and dictators have more in common with attacking the West and not forming a new government in Syria.

The Group of Nation in the prophesy is referring to the G7 or the West and the Great one may be suggesting an attack on the US expansive fleet of ships overseas.

Nostradamus Quatrain IX-100
A Naval battle will subdue night,
Fire in the ships, to the West ruin,
New rubric, the great ship colored,
Anger to the vanquished, and victory in a drizzle.

And, speaking of a naval battle where the West and the US are not the winners.

The Roman Catholic church will suffer as well due to the war.

Mel Brake is an awarding winning Philadelphia based poet/singer/song writer, whose poetry has appeared in several media outlets and journals, including Philadelphia Poets 2007, 2008 and 2009, Mad Poets Review, Fox Chase Review, and The Philadelphia Bulletin. In addition, Long Island Sounds: An Anthology of Poetry, Writing Outside The Lines (WOSTL) Anthology, Word Riot Magazine, The New Verse News, Word Salad Magazine and Poetry Ink 2010 has published his works. Recently, his band, the Mel Brake Family Band performed a benefit concert at Cross Road Café in Delaware County. He is the Founder and Executive Director of MPW, a non-profit organization, focusing on using the arts to reach children in the Tri-state area. In addition, his first chapbook, “Obama Poetry Project” is available at: MelBrakEpress.blogspot.com.
View all posts by melbrake →
This entry was posted in Uncategorized and tagged #Irannews, #Melbrake, #Melbrake2018, #MelBrakePredictions, #Melbrakewordpresscom, #Russianews, #SyriaCivilWar, #Turkeynews, Nostradamus, WW3. Bookmark the permalink.