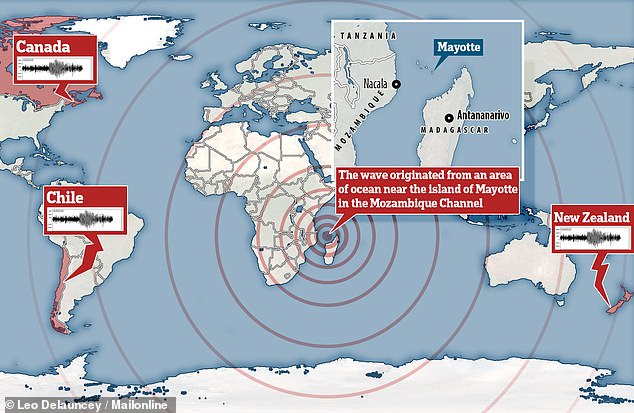 November 11, 2018 at 9:30 UT something happened on the Earth plane that has never happened before. Was this Event, the Event that has been foretold in 2016, 2017 and 2018 some are calling the Event, The Universal Warning.

The earth trembles from North to South and from East to West, the United States suffers from within.

Which I find very interesting because on the night of November 10, 2018 I had a vision about a crossroads showing the East, West, North and South and directional degree.

My people, the earth trembles at the imminence of the fulfillment of the Prophecies of My Mother and of Me; man stops believing that I anticipate the suffering of Humanity so that you would convert – not out of fear, but out of love and in order to save your souls.

And, one last warning from November 13th:

The celestial bodies remain in constant movement, threatening the Earth.

What is the Universal Warning:

The universal WARNING will be a cosmic event unprecedented in the history of humanity, a phenomenon of unknown nature to science; according to many seers it will be like switching on a LIGHT from the depth of the Cosmos, that comes directly from God and that will have a great repercussion on earth for approximately 20 minutes, it will be visible to the human eye but it will also be an invisible force that will stir the conscience of men, causing in human beings a great emotional, psychological and spiritual shock, nevertheless it will not produce any direct physical damage; however, it could very well be defined as “the last effort from heaven” so that humanity will have a clear conscience of God and of sin, broadening the spiritual dimension and the understanding of the MAGNITUDE of the distance we have created from God because of our sins.

In other words, this universal Warning will be a great test for the conscience of humanity, it will not be, however, something that will alter the course of the catastrophic events that we must confront, rather it will be an opportunity to change our view concerning this reality, being able to  gain from it immense spiritual benefits.

This event extensively revealed by God to many of His instruments around the world, is not actually widely publicly known, which at the same time not quite believable by others; undoubtedly the reader will ask himself why is that something of such an enormous magnitude has remained silent?  Perhaps the response is because it has not been linked neither to science (because it lacks tangible elements) nor to religion (because of its private revelation nature) which at the end remains solely on men of faith.

Some of the messages given by Jesus and Blessed Mary through chosen souls all through the years explain or have given some knowledge in details regarding its nature, and the effects that the human race will experience and the time in which this great Warning of God to humanity will occur.

It should be mentioned that this knowledge is given to chosen instruments in the form of internal locution, many times accompanied by visions and also in mystical forms, that is to say, to experience the event in its human nature – spiritual, feeling in this way the effects that the Warning will create, thus providing the knowledge of its true magnitude.

Many revelations have been known from authentic seers regarding this great WARNING of God to humanity for some time now, but it all started with the apparitions of Garbandal, where this subject matter has been transmitted to the five continents, having been understood in a more extensive context.  Let’s see now a brief synthesis of one of the most extraordinary Marian apparitions of history

November 11, 2018 at 9:30 UT an event happened in the form of a wave of sound that circled the globe,  the wave of energy begin in the Southern Indian Ocean and travel near the surface of the water for 20 minutes at very low hertz frequencies ( 1 Hz) and repeated repeatedly every 17 seconds. Some are saying that people did not hear the sound wave but many people did but were not aware of what it was. I had a vision of this event on November 11, 2018 but I could not make heads or tails of it until I read a news article about it.

This type of event has been classified as an earthquake but earthquakes shake and the earth was not quaking for a straight 20 minutes but the world was humming for 20 minutes with a low frequency sound. This is never happened before and science can not rationally explained what happened and why. So, I can only look to something greater, deeper and spiritually for meaning.

Even for The Event that so many have been waiting for, this sound wave does not completely match those conditions because there was no visible light in the sky and everyone did not stop what they were doing to take a look, and as for the Universal Warning, two stars or celestial objects did not collide in the skies.

In spite of the specifics of the Event and the Universal Warning, something did happen on the Earth that has never happened before that circumvent the planet in the wave of sound energy that was very musical and magical, and special.

Mel Brake is an awarding winning Philadelphia based poet/singer/song writer, whose poetry has appeared in several media outlets and journals, including Philadelphia Poets 2007, 2008 and 2009, Mad Poets Review, Fox Chase Review, and The Philadelphia Bulletin. In addition, Long Island Sounds: An Anthology of Poetry, Writing Outside The Lines (WOSTL) Anthology, Word Riot Magazine, The New Verse News, Word Salad Magazine and Poetry Ink 2010 has published his works. Recently, his band, the Mel Brake Family Band performed a benefit concert at Cross Road Café in Delaware County. He is the Founder and Executive Director of MPW, a non-profit organization, focusing on using the arts to reach children in the Tri-state area. In addition, his first chapbook, “Obama Poetry Project” is available at: MelBrakEpress.blogspot.com.
View all posts by melbrake →
This entry was posted in Uncategorized and tagged #Earthchange, #EarthHumming, #EarthMovement, #Earthquake, #Earthshake, #EarthSound, #Geology, #LightofMary, #Melbrake2019, #Melbrakewordpresscom, #November11th, #SoundRipple, #SoundWave, #SouthernIndianOcean, #StrangeSound, #THEEVENT, #TheUniversalWarning. Bookmark the permalink.

1 Response to The EVENT/The UNIVERSAL WARNING