TRUMP PROVEN TO BE THE FABLED ANTI-CHRIST 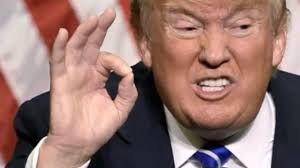 Is this the face of a man we can trust, or is this the face of a Deceiver, a con man, a snake-oil salesman, a sham-man and a shaman? Do you trust this man? What does your gut tell you? Here is our “quick” version of the top ten connections of Donald Trump to the number 666. The connections will be explained in more detail below (and there are some truly startling and disturbing facts).

(1) The Trumps own the most expensive building ever bought in the US, at 666 Fifth Avenue, a street symbolic of money (Mammon).
(2) The Trumps paid $1.8 billion for the 666 tower. And 18 = 3*6 = 666. The 666 tower is controlled by Ivanka Trump and her husband Jared Kushner. Kush was the patriarch of Babylon.
(3) The Trumps are also in the process of building a $666 million tower at One Journal Square. According to multiple reports the height will be 666 feet.
(4) The famous Trump Tower is 203 meters tall according to multiple reports. And 203 meters = 666 feet. The Trump penthouse is on the 66th floor!
(5) Donald Trump inherited his grandmother’s real estate empire when she died on June 6, 1966 = 6-6-6. Her name was Elizabeth Christ Trump. Elizabeth means “vow,” so her full name means “Vow for Christ to be Trumped.”

The 2016 election was “all Trump all the time” and 2016 = 666+666+666+6+6+6. Also, on June 6, 2016 = 666 the infamous Trump Tower meeting was arranged, as documented by emails between Donald Trump Jr. and Rob Goldstone (who acted as an agent for the “Crown prosecutor of Russia”). That meeting threw the presidential election to Donald Trump. Thus on 6-6-6 the godless Russian government conspired to help the Antichrist become the most powerful man in the world. Then on June 9, 2016 = 696 Donald Trump Jr., Jared Kushner and Paul Manafort had what appears to have been a treasonous backdoor meeting with Russian government agent Natalia Veselnitskaya, in which the evil deal was negotiated. Trump then tweeted about Vladimir Putin: “A guy calls me a genius and they want me to renounce him? I’m not going to renounce him.” That message was tweeted on June 16, 2016 = 6+(1*6)+(1*6) = 666. (As explained later on this page, Putin has made it illegal for Russian Christians to share their faith in their own homes. But Trump can find no fault in his fellow Antichrist!) Then, in what has been called the “pivotal event” in Trump’s collusion with Russia, a meeting was held in the Grand Havana Room of the 666 Fifth Avenue tower. The Grand Havana Room is suite #39, and that is 3 times an inverted 6, or 666. That meeting was between Paul Manafort, Rick Gates and Konstantin Kilimnik, a Russian military intelligence agent whose nickname was “Kostya, the guy from the GRU.” That meeting goes “very much to the heart of what the special counsel’s office is investigating [i.e., collusion],” prosecutor Andrew Weissmann told a federal judge in a sealed hearing. It seems this was the meeting at which Manafort and Gates conspired with Kilimnik to throw the 2016 election to Trump with Russia’s help, in return for Trump freeing Russia from billions in sanctions and looking the other way at Russia’s crimes in Crimea and Ukraine.

On the day Trump allowed the Nunes memo to be published—in a blatant attempt to discredit and smear the FBI while destroying public confidence in the bureau‘s integrity—the stock market dropped 666 points. If there are no accidents with God, what is God trying to tell His disciples?

The January 1998 cover of the adult magazine Genesis (the first book of the Bible) asks: “DONALD TRUMP THE NEXT PRESIDENT?” And 1998 = 666 + 666 + 666. Construction of the Trump World Tower began in 1998, with much of the money coming from Russia. This was the creation of a New World Order centered around Trump and Vladimir Putin. Trump praises Putin constantly, and vice versa.

2 Responses to TRUMP PROVEN TO BE THE FABLED ANTI-CHRIST